In the country of ´šišmiši´

From 31st of May to 3rd of June 2018 Regional Symposium "Conservation status of Bats in the central Europe and Western Balkan" in Sarajevo and the field trainig in Bijambare protected area took place. 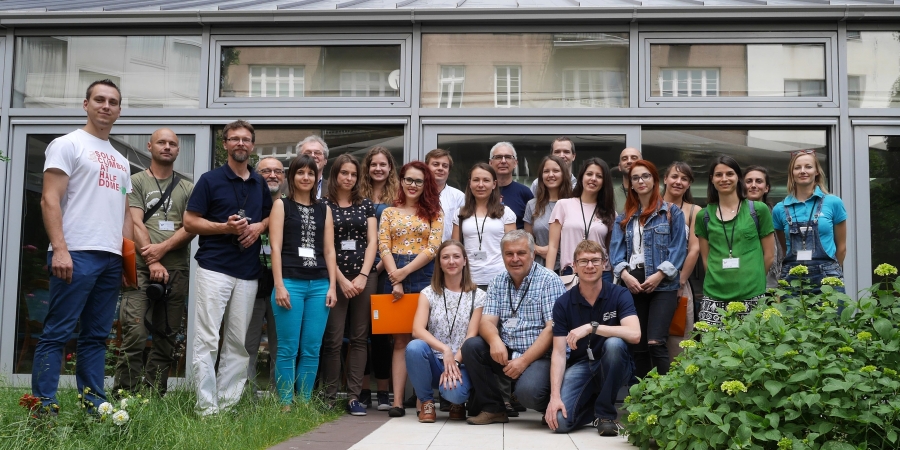 The main organizer was Center for Karst and Speleology (CKS), with cooperation of Slovak Bat Conservation Society (SON) and Mammal Conservation Group of Birdlife Hungary (MME). The general aim of symposium was the exchange of know-how, and best practices between middle european countries and Balkan countries.
More than 40 participants from 8 countries attended (Bosnia and Hercegovina, Slovenia, Serbia, Croatia, Slovakia, Hungaria, Poland and United Kingdom).

The program was divided into four sections: Bat distribution, Bat ecology, Bat conservation and Poster session. Professional leading of the sections was ensured by Primož Presetnik, Tomasz Kokurewicz and Henry Schofield. Useful discussions rised about various topics: new discovery of Greater noctule (Nyctalus lasiopterus) and protection of bats in prefab buildings in Slovakia, new discoveries of Barbastelle in Montenegro, International biology camp in Rujište. During the second day the mostly discussed topics were: foraging patterns of Greater mouse-eared bat in Slovenia, ringing of Miniopterus schreibersii in Serbia, research and protection of bats in Hungary and also rehabilitation of bats.

Very practical education aids for children were personaly presented by Sándor Boldógh from Hungary.
The special postal stamp with the logo of symposium was issued just for this occasion. Participants could send their postcards marked with this stamp from the local post office only during these days. The atmosphere of the meeting was very open and friendly. One of the participants Atilla Bereczky played piano spontaniously after the poster session.

Scientific exposition  of „Zemaljski Muzej“ in Sarajevo was also visited.
Trebević mountain was visited by cable-car as a sight-seeing trip. During the 1984 Winter Olympics Trebević, like the other Sarajevo mountains, was used for a number of Olympic events, such as bobsledding.

Some of the participants created research groups and moved to Bijambare protected area for the field training. After survey of some caves during the day (Gornja Bijambarska pećina, Srednja Bijambarska pećina and Donja Bijambarska pećina), researchers started mistnetting and detectoring in the evening. The presentation of different types of ultrasound bat detectors was performed. Automatic stacionary batlogger scanned the suroundings of „Jezero“ Lake. Hand-held bat detectors were used in the walking transects and close to the cave openings. The mistnetting continued to the late night. The students from University of Sarajevo, Faculty of Science and Mathematics and their teacher Maja Hodžić joint us during this activities. 8 of 12 species of bats („šišmiš“ in Bosnian language) in Bijambare protected area were captured during the night: Myotis blythi, Myotis bechsteinii, Myotis nattereri, Myotis mystacinus, Myotis brandtii, Myotis emarginatus, Plecotus macrobullaris, Pipistrellus pipistrellus, Eptesicus serotinus and Rhinolophus hipposideros.  M. emarginatus and P. pipistrellus are new species of bats for Bijambare protected area.

We want to thank organizers and all the participants for their effort and interest to come to Sarajevo and sharing their experiences.
The symposium and field training was supported by Visegrad Grant No. 21720391 „Let´s be friendly to bats together“ (visegrad.netopiere.sk).