Bats occurring in Slovakia create often numerous groups – summer reproduction colonies, pairing groups in autumn or several thousand aggregations at hibernation places. The size of the group varies up to species.   The common pipistrelle creates the biggest groups during the winter (record size 50000 individuals in one cave) and the summer record belongs in Slovakia to The greater mouse-eared bat – 5000 females collect each year in the attic of the church in Revúcka vrchovina Mts. 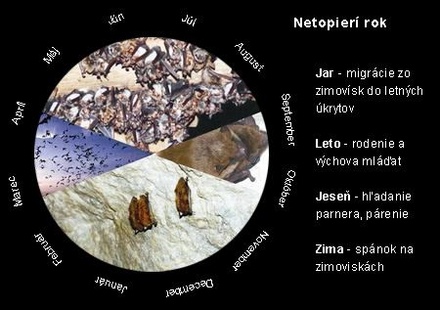 The bat year starts in the January with the deep winter sleep at safe places with relatively stable climate (caves, mines, cellars or cervices of buildings etc.). Bats awake when the winter has gone – usually in March or April. Bats spontaneously awake several times during the winter to complete the water reserves, occasionally to hunt, or to change the hibernation place if the conditions of the hibernation place are not suitable anymore. Bats are very vulnerable at that time and sensitive to any disturbance. In the spring, bats fly to reproduction places, females gather in larger groups, males remain in separate smaller groups. Youngs are born in June and July, are fed by the milk and soon fly and hunt insect. In September, the youngs look as adults. In autumn, bats gather for reproduction, many species reproduce in so called harem i.e. one male pairs with more females. In most cases, the fertilization is not complete and the female bat nourishes the sperm in the reproduction system up to the spring, when the fertilization is completed. In case of the parti-coloured bat, the fertilization is finished during the pairing, however the development of the fetus is interrupted during the winter. These adaptations are very specific in order to overcome the unfavorable conditions during the reproduction cycle.